Henry is a man that has worked his ass of to get to his station in life. He is 49 years old, married with two children. He owns and operates a small electrical company in West Palm Beach, Lightning Rod Inc. Lightning Rod employs Henry and four others.

Henry got his start in the business nearly thirty years ago as a young journmeyman electrician learning the trade. From the beginning, Henry leveraged his work ethic, his vision and his willingness to take a risk. After several years working for others and learning the trade, Henry struck out on his own.

He saved up some cash to incorporate Lightning Rod, purchase the liability insurance and buy a few business cards. From that day forward, Henry bet on himself and worked like hell to build a reputation for his small business that was a reflection of him – honest, skilled and dependable.

The bet Henry placed on himself paid off. Over the years, Henry navigated the obstacles and steps required to grow the business. He hired additional electricians, developed office systems, inventory systems, marketing systems and metrics to track everything that was important to keep his business healthy.

Professionally, life has worked out pretty well for Henry. It makes sense to him. The harder he works – the better business gets.

Personally, life has not been so straightforward. He married his wife, Megan, eighteen years ago and they have raised two wonderful children together. Lightning Rod has provided a nice lifestyle for them over the years. Megan worked hard as a full time mom in the early years. She now works part time and still makes sure that important events for the children are taken care of, bills for the household are paid on time and the work is done at home to make life comfortable.

Unfortunately, Henry and Megan no longer want the same things out of life. Megan is happy with the social life they enjoy, shopping, occasional travel and going out to nice restaurants.

Henry and Megan have developed separate lives that intermingle occasionally for family and social events. They haven’t been out on a date of their own in years. Henry and Megan both enjoy time with their friends separately.

The divide between them continues to grow each year. Henry no longer knows many of Megan’s friends. Megan no longer feels guilty that she looks forward to Wednesday and Friday nights when she knows that Henry will be out for work or with his buddies.

Henry is a financial provider, but is very little else. The love and fondness they once shared has eroded to the point where it feels forced.

Henry can’t wait to see what comes next. He wants to take trips to the Grand Canyon, Napa Valley, Japan and Alaska. He has worked hard for a long time and now he’s ready to take his foot of the gas and enjoy the next stage in life.

He is not ready to retire but he is ready to change his lifestyle to allow for more leisure and less work.

He is not willing to be content. This is how my life is going to be. He has always felt that the balance will slowly shift from working constantly to working less and enjoying life more. New experiences. New challenges and different perspectives.

Henry loves Megan. He loves his family. But he doesn’t want to remain in a loveless marriage with no change in sight. He is feeling the pressure that time is running out. If there is someone out there that is still interested in changes and challenges and would love to explore with him, is it too late to find her.

Is he selfish if he decides that he wants out of this marriage?

He wonders what life would look life if he separated from Megan. What would he look for in a new partner. Would he ever feel those butterflies that come with a new relationship again.

Henry has thought about what could happen if he were to divorce Megan many times in the past few years. What would have to be done to make sure that the separation and final divorce was pursued in a respectful and civil manner. Is it even possible? He knows it would not be easy. Can it be less difficult?

He really just wants to know what an fair divorce agreement would look like. What solutions are available based on the life that Henry and Megan have built together. How do you deal with the house, retirement assets, monthly budget and the business. Does the house have to be sold. How will the monthly bills be paid if Henry moves out before the divorce is finalized. How will the bills be paid once the divorce is over. Does alimony apply under the circumstances of their marriage. Can it be made clear and agreed on that the business must remain under the control of Henry to assure it continues to function and thrive.

Henry has provided for his family for many years and he has no intention of changing that suddenly. He is seeking a solution that will allow both he and Megan to move forward in life in a secure financial position. He is well aware of the position that they have both worked hard to attain for their family. He also knows that there is no benefit to him or Megan to throw money away fighting out a divorce.

The other extreme of a do it yourself divorce is also against his better judgment. Mistakes and the trial and error method are both unacceptable to Henry. His gut tells him that he needs professional help to get the divorce resolved properly and efficiently.

Henry does have concerns about the business and wants to assure that it will continue to operate properly. If the business is dragged into the divorce and ultimately suffers, everything else will surely fall apart from there.

The business is the engine that drives the lifestyle they have built together. It must be made clear that we cannot kill the golden goose.

The business has always been run by Henry and must continue to do so if they want to keep the suppliers, contractors and clients satisfied.

After much contemplation, Henry schedules a meeting with his long time accountant, Ray. He tells Ray in confidence that he is going to separate from Megan. He tells him that he wants a fair settlement. He is not sure what that is but he knows that that is the best way to approach this difficult time. He does not want to fight to win the divorce.

Ray has been advising Henry and Megan for over 20 years regarding their personal and business finances. Ray knows that Henry and Megan are good people that have no inclination to fight for the sake of fighting. They value their lifestyle and have enough sense to protect what they have earned.

A messy divorce riddled with mistakes and not knowing what you don’t know is not an option for them. Ray has talked to many of his clients over the years about planning for divorce. He rattles off an old adage he heard years ago that rings true, “Divorce is like an open wound, it should be addressed promptly and properly so it won’t get worse.”

Ray refers Henry to a divorce attorney that he has worked with in the past. The attorney focuses his practice on settling divorce cases in a professional and amicable manner.

Henry makes the call the next day and schedules a consult with the attorney that Ray recommended. The receptionist was kind and scheduled the appointment right away.

Thirty minutes after hanging up the phone, just as the receptionist had said, Henry received a divorce consultation form in his inbox. Henry completed the form from his mobile phone and off it went back to the receptionist and the attorney to help them prepare for his consultation. The form also helped Henry to flesh out what was really important to him in the divorce, what goals he had, what worries he had and the major questions he that he wanted to ask the attorney. 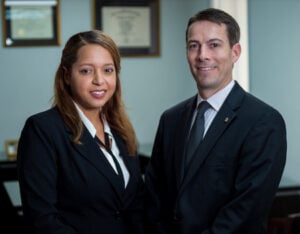 Henry met with the attorney only a few days later. The fear of the unknown quickly subsided. The two of them focused on the goals Henry laid out in his consultation form and solutions to achieve those goals. They defined the steps necessary and estimated time to achieve each step. The attorney gave Henry realistic expectations of what a divorce settlement could like in his case based upon Florida Law and the experience of the attorney in similar cases.

Ray was spot on as usual. The attorney was knowledgeable and experienced in divorce settlements. He knew the best route to take and how to perform the steps required to get there.

As an added benefit, Henry and the attorney entered into a fixed fee agreement for the services of the attorney. The peace of mind Henry gained from knowing that he and the attorney were working to settle the case and not to rack up billable hours was a great way to start their professional relationship.

After Henry hired the attorney, the questions and unknowns that Henry was grappling with (initial separation, control of assets, whom pays which bills, what will my finances look like once this divorce is over, what will my life and living situation look like, can I keep the business solely) all quickly became answers and proposed settlement terms.

The settlement agreement was negotiated, drafted and ultimately agreed upon in a span of about two months. The business continued to run smoothly. Henry and Megan each received a fair distribution of their assets. They both reviewed and planned their financial future before executing the settlement agreement. Henry received the business. Megan received the home. Retirement and other assets allowed both of them the financial security they needed to start their new lives.

The attorney handled all of the court filings and legal requirements to obtain the approval of the judge for their final uncontested dissolution of marriage judgment. The divorce was finalized only three months after Henry made the initial call for a consultation.

All the worries: can I get a divorce, how would I even approach a divorce, what settlement would be fair for us, how will both of us look financially after the divorce is over, can I avoid the dreaded nasty divorce - they had all now melted away.

A professional was hired to handle the divorce in a respectful and civil manner. He outlined what he would do to help and what it would cost. He listened to Henry and he accomplished the goals they set out to achieve. He had the knowledge and tools required to resolve the divorce properly.

The Divorce is Over and Life Moves Forward

Looking back on it now, Henry can breathe a sigh of relief and say that divorce is not the boogie monster. It is tough. It is not fun. It can be done the right way. With the help of a professional, divorce is a defined legal process that is completed in an orderly and professional manner.

Henry is content with the outcome. He called upon the same traits that have served him well in the past – identify the problem and take action to resolve it properly the first time.